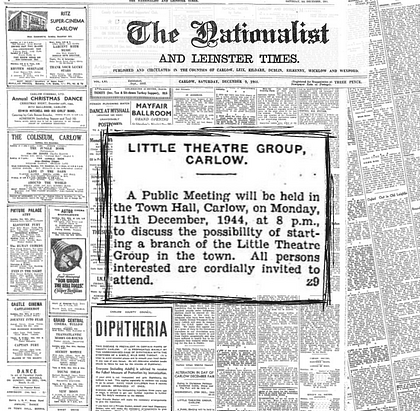 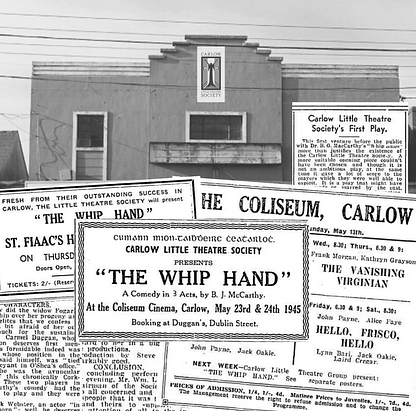 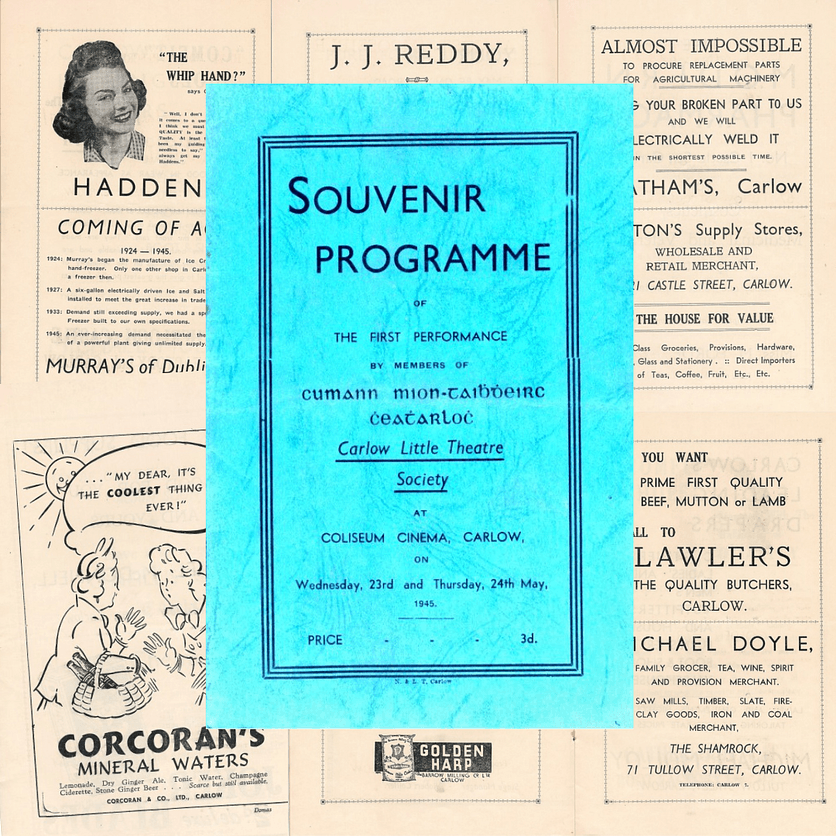 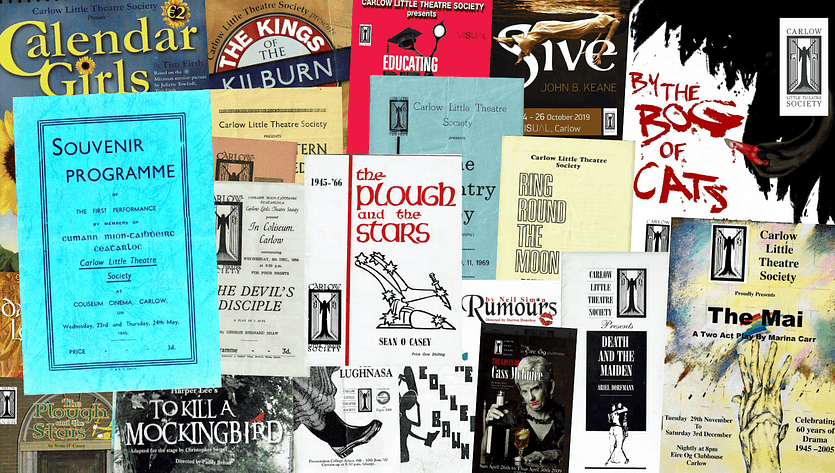 Carlow Little Theatre Society is one of the oldest drama groups in Ireland. At 8pm, on Monday 11th December 1944, a group of like-minded people got together at Carlow Town Hall to discuss forming a local drama society and thus Carlow Little Theatre Society was born. On 23rd May 1945 we produced our first play ‘The Whip Hand' and since then, we have on average, performed a One Act season and a full-length production each year.

We welcome all aspiring or established actors and writers wishing to try out new material, as well as anyone with a desire to work with us behind the scenes (Directing, lighting, production, costuming, etc) from aged 16+.

To become involved, simply follow our social media updates and then come along to one of our readings or social nights. Alternatively, please feel free to email or PM us.

Extract from the Drama League of Ireland Magazine 1956

UP- AND-COMING CARLOW GROUP Carlow Little Theatre Society was launched in 1945. The membership was 30; it now stands at 200.

The society had no funds, no premises in which to rehearse, no suitable hall in which to stage its productions. The annual subscription was fixed at 5/-, to ensure that nobody wishing to join would be debarred from membership on the grounds of a restrictive fee. It was found however, that it would be impossible to develop on such a slight income and members decided to raise the subscription to 1-/-, at which figure it now stands.   A room in the old Christian Brothers School was made available for rehearsals through the kindness of  theVery Rev D.B Kennedy, Adm. and Rev N. Cullen, CC, Graiguecullen, allowing the members the use of St. Fiacc's Hall at production times to accustom the Players to actual stage conditions. The ideal  from the start was for the society to acquire premises of its own, and ultimately to build its own Little Theatre. In 1951, the Society acquired a house in Brown Street, which had deteriorated from a Georgian townhouse to a tenement and had  been condemned as unfit for human habitation. A Bank overdraft was secured and the society entered occupation.   Working parties of members were formed. Floors were repaired, windows fitted, walls made sound, ceilings re-plastered and the premises wired for electricity. The work is still going on, and the premises are now as cosy as a little Club and as much as any Society could wish to have. Every night, members can be found there, rehearsing, reading scripts, helping on renovations, or merely sitting around relaxing in the pleasant atmosphere of good fellowship which has been a feature of the Society since the start.

Since its inception, the society has produced at least one three-act plays each year and several one-act plays each season. It encourages impromptu readings of sketches to accustom members without stage experience to the feel of acting while encouraging members to produce one-act plays with the dual purpose of discovering new acting talent and new producers.  These plays are produced in public and are seen by an invited audience of  members and their friends. No charge is made for admission and audiences of 300 or more are the norm. Among its productions to date are Shadow and Substance, Gaslight; Juno and the Paycock; The Rugged Path; The Whip Hand; Home is the Hero; the Shadow of a Gunman; Pygmalion; Arsenic and Old Lace.   For its Tostal production this year, Myles na  Gopaleen's  play, Faustus Kelly was chosen. A turning point in the Society's development was the coming of Miss Ria Mooney a few years ago to advise members on production and acting technique. She gave a completely new orientation to their methods and aims. They admit frankly that anything they know of acting and production they have learned from this dynamic and  gracious lady.

Although she has very little spare time as part of her duties as producer of the Abbey Theatre, she always spares a week-end to come down to advise, criticise, and mould the cast into a smooth moving team, before each play is staged.

Besides the invaluable aid given by Mill Moloney, the Society has arranged lectures for its members by Walter Macken, Ronald Ibbs, Brendan Smith, Gabriel Fallon, Anew  ster, Maurice O'Brien, DD Franks. In co-operation with the Carlow Arts Council and Carlow Vocational Education Committee, the Society arranged two RDS Lectures by Roger McHugh on the Theatre in 1953/54. These were open to the public and drew large audiences.

Besides presenting their plays in Carlow, where they drew overflowing audiences to the Coliseum Cinema, the members have toured to Athy, Tullow and Bagenalstown where they have been given enthusiastic receptions. Members have also co-operated with Macra na Feirme in supplying Adjudicators for the Macra Drama Competitions.